London, 6 October 2022 – Audible, a world-wide leader of spoken-word entertainment, has today announced the return of Climate of Change with Cate Blanchett and Danny Kennedy (CEO of New Energy Nexus), as the long-term friends explore anxiety and optimism in the face of the climate crisis for a second series, launched today. 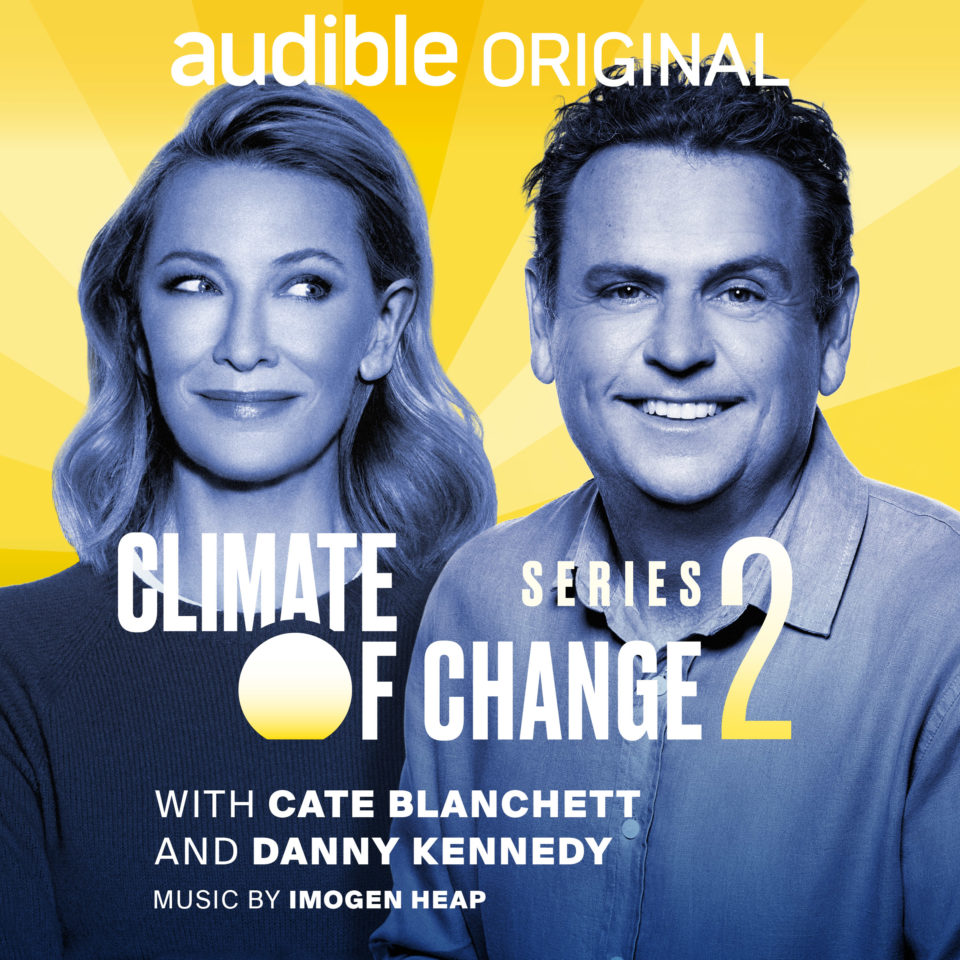 The podcast follows the pair – award-winning actor, producer and environmental advocate, Cate Blanchett and climate entrepreneur and activist, Danny Kennedy – as they speak directly to visionaries and trendsetters who are making innovative strides to turn the tide on climate change.

Across six new episodes, the duo delves into a fresh round of eye-opening topics, with Series 2 travelling to a Jordanian refugee camp where its first solar plant is revolutionising the lives of its inhabitants, to Delhi, where electric rickshaws are dramatically reducing the bustling city’s pollution, and to Northern Australia, where indigenous know-how is transforming fire management.

Following hot on the heels of the first series that welcomed HRH The Prince of Wales, former President of Ireland Mary Robinson and director Adam McKay, Series 2 will welcome renowned special guests* such as the diplomat and climate change leader Christiana Figures, environmentalist and activist Bill McKibben, anthropologist Tim Ingold and author Lucy Siegle (Turning the Tide on Plastic), alongside people on the ground who are transforming lives through their innovations.

Co-hosts and co-creators of Climate of Change, Cate Blanchett and Danny Kennedy, said: “So much has happened since we first recorded the first season of Climate of Change, but what remains consistent is the relentless march of clean energy solutions. Nearly US$1 trillion has now been invested in climate tech and the clean energy transition, and one of the challenges will be making sure that the 770 million people without electricity are not left out of this transition. That’s why we need more innovators from all corners of the world to be part of this movement. From Uganda to Australia, this season of Climate of Change will fill you with hope that it’s possible and point you in the direction we need to move the world towards.”

Those captivated by the podcast may be interested to hear that companion podcast, Reflections on Change, is also available now. Featuring compositions originally created as the soundtrack to Series 1 of Climate of Change, Reflections on Change takes wildlife and environmental sounds hand-picked by filmmaker and biologist Dan O’Neill and turns them into a musical landscape through the skilled hands of Grammy award winner Imogen Heap.

Reflections on Change carries an impactful message and hopes to provide an immersive space for audiophiles to do just that – reflect – as its creators compel audiences to appreciate the variety and magnificence of the environmental sounds at risk from climate change.

Both Audible Originals, Climate of Change with Cate Blanchett and Danny Kennedy Series 2 and Reflections on Change are available from Thursday 6th October, exclusively on Audible.* See full list of contributors to Series 2 in the notes to Editors.

Episode 1: In a “Persistence of Positivity” Canny and Cate hear from Christiana Figueres on why she is a “stubborn optimist”, anthropologist Tim Ingold on how everything is connected, and we go to Northern Australia to hear how indigenous know-how is transforming fire management.

Episode 2: In ‘A Mayhem of Cars’ Danny discovers he is rather good at imitating the sound of a horse while Cate consults her book on collective nouns for inspiration as the duo delve into the world of transport and look at how we are going to be getting around in the future. They find out about electric rickshaws in Delhi and all about India’s first solar ferry. How parents and school kids in Barcelona are taking over the streets and they discover the first city in the world where all the public transport is already electric.

Episode 3: In ‘Fire in a Wire’ Cate and Danny discover how simple and straightforward it can be to provide clean, green energy to everyone. In Nigeria the answer is to use solar and batteries to power generators. Another innovator is helping remote communities in Cambodia who aren’t even connected to the grid. And the first solar plant is built in a refugee camp in Jordan revolutionizing the lives of those now living there.

Episode 4: In ‘The Buffalo in the Room’ Cate and Danny address the climate question that nobody ever seems to talk about – how do we pay for the fossil free future we need today? The answers are surprising. Professor Eric Beinhocker explains why we could all be richer

if we switch quickly. Find out how to own your own wind farm and how small loans can create huge change.

Episode 5: One word can really cause Cate to explode in fury – plastic. We find out how to tackle the scourge of the planet and how decreasing plastic production would also dramatically reduce emissions from fossil fuels. Two big problems with some very clever solutions. Refill deliveries from Chilean start-up Algramo, Econyl fabric made from the nylon nets and fishing gear left in our oceans and two activists on a mission to stop cucumbers or anything else being wrapped in pointless plastic.

Episode 6: ‘Is Anyone Listening’ is the final episode and Cate and Danny are on fire. Leading activist Bill McKibben gives us reasons to hope in dark times, Professor Saleemul Huq offers proof that we can adapt to a changing climate from Bangladesh and Oluwadabira Abiole-Awe brings positive energy and innovation from the youth movement now working on climate solutions. All the hope you can handle in real world technicolour… hopefully.

Audible, an Amazon company, is a leading creator and provider of premium audio storytelling, offering customers a new way to enhance and enrich their lives every day.  Audible.co.uk content includes more than 700,000 audiobooks, podcasts, and Audible Originals. Audible has millions of members around the world who subscribe to one of 10 localised services designed for customers in Australia, Canada, France, Germany, India, Italy, Japan, Spain, the UK, and the US. Audible members download nearly 4 billion hours of content annually and listen across a wide range of supported devices.

Cate Blanchett is an internationally acclaimed, Academy award-winning actor, producer, artistic director, and humanitarian. She is a Global Goodwill Ambassador for UNHCR, the UN Refugee Agency, and a lifetime member of the Australian Conservation Foundation. Blanchett is also a strong supporter of the Australian Wildlife Conservancy and received a Crystal Award at the World Economic Forum in Davos for her work with UNHCR. In 2012, Blanchett was awarded the Chevalier de l’Ordre des Arts et des Lettres by the French Minister of Culture. She has presided over the festival juries in Cannes (2018) and Venice (2020). She has received Honorary Doctorates of Letters from the University of New South Wales, the University of Sydney, and Macquarie University as well as the Companion of the Order of Australia in the General Division in recognition of her continued advocacy for the arts as well as humanitarian and environmental causes. Blanchett plays the titular role and executive produces Todd Field’s highly anticipated feature film “TÁR,” which marks the writer-director-producer’s first film in over 15 years. This fall, Blanchett will appear in Guillermo Del Toro’s latest film, “PINOCCHIO,” and the mockumentary hit series “Documentary Now!” She will also begin production in Australia on Warwick Thornton’s “The New Boy,” in which she stars and produces via her production company Dirty Films. She most recently wrapped production on “Disclaimer,” directed by Alfonso Cuaron, in which she also stars and executive produces.

Danny Kennedy is the CEO of New Energy Nexus (NEX), the world’s leading ecosystem of funds and accelerators supporting clean energy entrepreneurs. NEX started in Silicon Valley and now runs programs in Australia, China, India, Indonesia, Nigeria, the Philippines, Singapore, Thailand, Vietnam, Uganda, and the USA. Since 2004, it has accelerated over 600 clean energy startups, supported over 3000 entrepreneurs, and mobilised over US$1.5 billion in investment. Danny is also an advisor to clean energy companies in Australia, China, Kenya, the Philippines, USA and elsewhere. Danny co-founded Sungevity, a solar pioneer in 2007, was the first backer of a now US$6 billion solar loan provider Mosaic in 2011, as well as an author of a book on rooftop solar. He speaks regularly to media and at major conferences and is co-host of a forthcoming podcast on Audible.